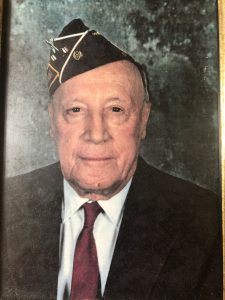 This month’s letter is a departure from my regular newsletter, and as such, I ask those of you who regularly read what I write to indulge me this month.

The summer after my 16th birthday I spent in summer school to gain a head start on the upcoming school year. A few days before leaving Mexico to spend the summer in Tucson Arizona, my dad stopped by the house for lunch and said I was to come with him to the plant that afternoon (my dad was not in the habit of asking me things; it was a command and control type of home).

I grew up in Mexico, and I will provide more on that in future letters. What is relevant here is that I had gone as far as I could in the company school, and that previous winter, I needed to decide where to go to continue my schooling. I had the choice of going to Mexico City and preparing to enter the university there or return to the States. I chose to go to school in the States at New Mexico Military Institute in Roswell, N.M.

By way of background, my father was a mining engineering and would spend more than 30 years working in the mining industry in Mexico. At that time, we were living in northern Mexico in a town called Cananea, and the mining operation was a combined open-pit/underground copper mine.

On that particular afternoon, my father had a purpose, but he did not explain it to me immediately. After lunch, we got into his pickup and drove to the smelter. Few people know what that is and that it’s a scorching environment, and quite aromatic. He met with a colleague, and they discussed the information dad had provided the superintendent of the smelting operation that would impact that week’s production.

He repeated this process by stopping at the Concentrator, which is where they process the copper ore and prepare it for the smelter, and again talked with one of the key people in charge of that operation; after which we went up over the hill to the open pit mine site. There he asked me to stay in the truck until he had spoken to the man in charge. I was not allowed out of the truck because they would be blasting later that afternoon.

When that part of the visit was done, he drove up to a point on the company property where we could look out over the parts of the mining operations we had visited, as well as looking out over the town itself. Sixteen-year-old kids are not deep thinkers by nature but having lived with this man for 16 years, I knew my dad had a purpose for this tour, and I also knew there was no point in asking any questions. He would tell me when he was ready.

On reaching that overlook, we got out and stood in front of the pickup, and he started talking about my decision to spend the next three summers in Tucson between terms so I could finish high school in three years; which I ultimately did. He said that beginning next week, I would from that point on be an occasional visitor, and as time went by I would see the house as my parent’s house and not really my house anymore. He looks at me as said it was important to develop the routine of writing my mother regularly. Knowing my dad as I did, I knew enough that there was more to come.

He stood looking out over the plant and the town and said to me what has stayed with me all my adult life, and has guided my actions to this day. He looked at me and said, “don’t chase money. I don’t know what you will seek as a career, but find a way to build things – things that last.

As you get older, you will be tempted to chase bigger paychecks, and that is the danger. If you are good at what you do, people will pay you to do it for them”. He was silent for a while and then repeated it. Remember to build something that lasts, do it well, and do it with pride.

We then got back into the truck, and he drove the company recreation center. I remember it had pool tables, billiard tables, ping pong tables, tables for card playing (which we were not allowed to do in public), and a two-lane bowling alley. Both the men and the women had ferocious bowling tournaments.

We stopped there where he had coffee, and I drank a coke. I remember that part of the afternoon’s journey well because when he usually stopped at the recreation center, which had a bar, he did not stop there to drink coffee. My dad enjoyed his daily libation, but he rarely drank at home because he thought doing so would set a bad example. Without saying anything directly, the fact that he took me there, sat with me, and shared a drink – non-alcoholic though it was, told me that things were going to be different.

As a result of that simple set of statements, I spent much of my career on large construction projects. Over the years many of them were billion-dollar projects from Alaska to South America and points in between. The last 15 years of my career in the corporate world were spent mainly dealing with conflicts between my employers and either contractors or clients.

It led me to what I am doing now and forms the basis for much of what I write about in my books, these monthly letters, and in my blog, and in many respects, I continue to do what I have done most of my adult life; only now companies come to me to help rebuild what is broken. And no matter what achievements come my way, or challenges I undertake, I must acknowledge that I did not get where I am without God’s help or the help of a man who is no longer here.

I write this letter because my father died last month at the age of 103. He was one of the most honorable men I have known, and he had one of the sharpest minds of anyone I ever knew; with a remarkable ability to recall names and events whether they happened last week or 50 years ago.

Like most of us, he was a flawed man; flaws that made him thoroughly human. Many people liked my dad, warts and all, and shared with my siblings and me their liking and admiration for him.

However much he at times angered us, confounded us, he was capable of extraordinary compassion. He was the lodestone of our family, and he deserves to be remembered for what he accomplished.

This letter is my way of saying so long dad; you did well.