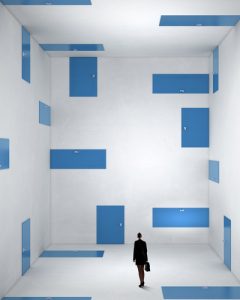 Leaders fail, and companies fail when they promote their corporate values without first preparing the ground. Many people, especially business people, don’t like to talk about principles because they fear accusations of bias or multiple “isms” that pervade public discourse today, and yet a discussion of the law or policies that are the foundation for either personal or corporate values is necessary.

If a person cannot articulate the principles by which he leads his or her life, then whatever situation that person finds himself will define who he or she is. Similarly, if the leader of a company cannot explain the underlying principles for the values that he or she deems essential, that company will be seen as talking the talk but not walking the walk.

Principles are necessary truths, universal laws, or propositions that serve as the basis for a system of beliefs or behaviors, and serve as the framework for moral and ethical standards and rules.

At the risk of overusing a metaphor before you continue down a particular road, it is essential to look back from time to time to assess the progress we have made. That is the case when looking at standards and rules. I find it surprising that so many people say principles are more important than standards, and they don’t matter all that much because they are subject to change. It is one thing to tell someone a law is more important than a rule and must defend the principle vigorously, but this narrow view misses the unbreakable link between policies and regulations.

When discussing this in the work I do, I use metaphors, and one of these is the sailing ship. Pictures of the vessel used by Columbus to cross the Atlantic Ocean show ships that were small and slow-moving; yet, they did the job.

These ships were designed with a narrow bow (front) so that it could push through the water with less effort, and it was broader in the middle for stability and so that it could carry people and cargo. It stern (the back) was wider than the bow but not as wide as the middle. The masts supported the sails which provided the locomotion.

If you compare the ships used by Columbus to cross the ocean to the Clipper ships of the late 18th and early 19th century, you can see remarkable differences between these types of vessels. The shapes may have changed and the rules for operating these ships changed, but the principles underlying a sailing ship had not.

If you look at the modern aircraft carriers of our Navy, the sails are gone. These mighty ships are nuclear powered, but if you look carefully, you can see they are the same principles that guided the ships Columbus used. What is equally important to note is that in that span of 500 years many of the rules governing vessels crossing an ocean changed, but not all. Some of the rules still apply today.

The point I make in my consultations is that principles can change, but it is something that should happen on rare occasions. American football is also a good example. The game has changed dramatically over the past 100 years, but the goal posts are still in the same location and serve that same function. When new data becomes known, one changes the rules to take advantage of the latest information. To use a common vernacular; you don’t move the goal posts.

Far too many people dismiss the foundational nature of principles and equally damaging, they reject the connection between a principle and the rules and standards created from them. Said differently, this lack of care over the relationship between a law and the related regulations create opportunities for great mischief. One only has to look at what goes on in many agencies at both the state and the federal level to understand this. Every year agencies at multiple levels of governance issue more rules and often announce these rules with great fanfare.

Each passing year the rules mount in greater and greater numbers and complexity and grow more distant from the principles on which they are derived. In some cases, agencies create new policies (laws) to justify the rules they want to write and do so without understanding (or perhaps they do understand) that moving the goal posts defeats the notion of building on a firm foundation.

The processes have become so unwieldy that managers and employees are forced to segment and segment again with the result that the average bureaucrat can’t see the whole picture. It’s as if he is handed a map with no starting point and no ending point, and he is expected to complete his tasks in a vacuum. In short, a map leading nowhere.

Food for Thought:  “There is a true law, a right reason, conformable to nature, universal, unchangeable, eternal, whose commands urge us to duty, and whose prohibitions restrain us from evil, it is not one thing at Rome and another at Athens; one thing today and another tomorrow; but in all times and nations this universal law must forever reign, eternal and imperishable. God himself is its author, its promulgator, its enforcer.” (Marcus Tullius Cicero)